The worsening social and political crisis in Peru is threatening fruit exports as violent protests against the Boluarte government spread to more regions. 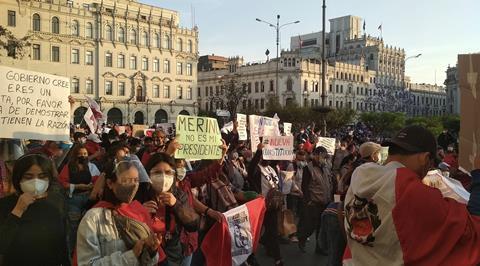 The unrest, which has left at least seven people dead and blocked roads in large parts of the country, is beginning to affect shipments of fresh fruit and other export crops.

Rabobank analyst David Magaña warned that the crisis has hit the country in full harvest season for blueberries and grapes.

On Tuesday the Association of Agrarian Producers Guilds of Peru (AGAP) issued a statement against recent attacks on some of the country’s leading fruit export companies.

“AGAP condemns the attacks carried out by violent mobs on the Danper companies in Arequipa, and Athos and Florida Blanca in Ica,” it said.

“From the union we stand in solidarity with the founders and thousands of workers of the affected companies and we demand that those responsible be captured and punished in an exemplary manner.”

AGAP has urged the government to restore order and re-establish free transit on highways immediately.

“Citizens, workers and companies cannot remain defenceless and in the hands of criminals and agitators. The state has the obligation to defend democracy within the framework of the constitution and laws, urgently restoring order, security and the rule of law in Peru,” AGAP said.

The protests have compounded an already challenging season for the fruit sector, which has been hit by high costs and ongoing drought.

AGAP’s executive director, Gabriel Amaro, warned that the growing uncertainty is threatening Peru’s position as a major supplier of Southern Hemisphere fruit to the international market.

Political unrest has been building in Peru for months. Things came to a head on 7 December when former president Pedro Castillo, who enjoyed strong support in rural areas, was impeached and arrested.

New president Dina Boluarte, Castillo’s former vice president, has declared a state of emergency in a number of rural areas.