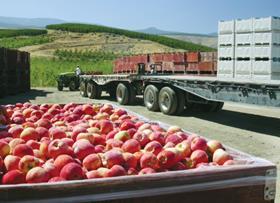 WSTFA’s August forecast projected 124.85m cartons of fresh apples would be packed across the US state.

After receiving updated data from its members, who have now picked the majority of this season’s crop, WSTFA forecasts a packout of below 120m cartons.

“Apple harvest is still wrapping-up for some Washington varieties, but based on volumes harvested so far our members are expecting a decrease to 118.2m boxes,” said Jon DeVaney, WSTFA president.

“Our members are reporting smaller crops of some varieties including Honeycrisp, Galas, and Red Delicious. High heat earlier in the season affected what was ultimately picked in some cases.

“In spite of the smaller harvest, we are seeing high-quality fruit and consumers can expect delicious Washington apples throughout 2022.”

The organic portion of the crop is projected to be over 15m cartons.

This report is based on a survey of WSTFA members and represents fruit picked through 31 October, along with a “best estimate” of what is still to be harvested.