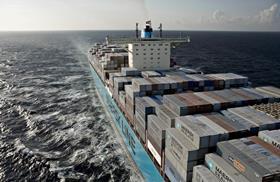 A container ship believed to be carrying fruit cargo from South Africa has been damaged following an on board fire. Reports have been received that Liberian flag vessel Maersk Seoul suffered a fire and explosion on board on 22 July just off the coast of the UAE.

The vessel had earlier sailed from the port of Jebel Ali in Dubai having previously called at Jubail, Damman, Khalifa, Jeddah, Port Said, Genoa, Barcelona, Valencia and Tangier.

The vessel is currently on her way back to Jebel Ali from where she had sailed on 19th July 2015. Prior to this the vessel had called at Jubail, Damman, Khalifa, Jeddah, Port Said, Genoa, Barcelona, Valencia and Tangier.

Dolphin Maritime and Aviation Services reported that the vessel was likely to also be carrying transhipment cargoes to and from various other ports around the world.

Sources say the vessel was carrying a number of containers of South African citrus bound for the Middle East, however no details are known about who the affected companies are.

“We are currently awaiting feedback from Maersk and additional information for the vessel’s movements before and after the incident,” Werner van Rooyen of South Africa’s Fresh Produce Exporters Forum told Fruitnet. “The vessel has not called at South Africa for the last two months so any cargo affected is likely to be cargo at transhipment ports.”