SATI speaks out on challenges 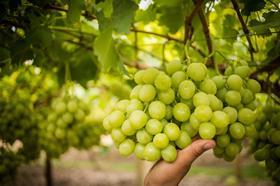 South Africa’s table grape industry body SATI has said that this season would be remembered as one of the most challenging campaigns for the industry.

This is due to numerous external factors such as logistical challenges – both domestically and internationally – cost inflation and the Russian invasion of Ukraine.

“Given recent media coverage concerning the industry SATI would like to share our view on the matter and communicate that all possible avenues are being explored to address the situation,' the industry body stated. 'Furthermore, we’d like to highlight continued progress and efforts regarding supporting our producers and the industry.'

SATI revealed that the volume packed would probably exceed last year’s total by more than 9 per cent and would be up to 17 per cent higher than the 2020 season.

It has also been revealed the country's fresh produce export industries have met with South Africa’s minister of agriculture, land reform and rural development, Thoko Didiza, at her request to discuss the effects of the war in Eastern Europe.

According to SATI, the minister offered the opportunity for the industry to make recommendations on how the government could assist by speeding up certain processes that would benefit South Africa’s fruit exports.

“The meeting resulted in a document being drawn up by fruit industry role players tabling recommendations regarding logistics, improving productivity in the harbours, and reviewing tariffs to unlock and further develop certain markets,' the industry body continued.

“As a representative of the table grape industry, we (like other industry stakeholders) have engaged with Transnet regarding harbour operations over the last several months – and remain in constant contact with Transnet stakeholders in this regard.

'In the interest of not only the table grape industry, but also the South African fruit industry and other role players, we continue to explore all possible avenues to address the situation in order to improve our harbour’s productivity and ensure that fruit reaches export markets in the best possible condition,' SATI outlined.

SATI said it was encouraged by the leadership at Transnet and believed that productive engagement with this key industry role player was the most effective mechanism to achieve the industry-desired results.

“We note the President’s remarks during the latest State of the Nation Address and take comfort in the fact that, along with other key infrastructure projects, our harbours will remain a priority and a very important link in the agribusiness value chain.”

Referring to the season, SATI explained this year would probably be its largest export crop yet.

“We acknowledge the industry for their hard work to achieve this. We are acutely aware of the profitability challenges our producers are facing given numerous external factors including weather conditions, inflation, rising input costs and the Russia-Ukraine situation.”

Producers and their well-being remained its primary focus, SATI noted, and said it would, together with industry stakeholders, 'relentlessly keep exploring all avenues' to facilitate the necessary changes required at all levels to support the industry.

While the harvesting season for the Northern Provinces, Orange River and Olifants River have come to an end, the Berg River and Hex River regions, which are both having above average campaigns, should still be packing for at least the next two weeks.