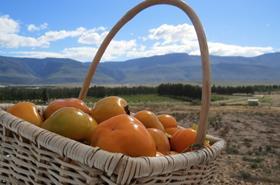 ‘The reports from the orchards indicate a good quality year,' he confirmed. 'We experience good demand for our fruit.”