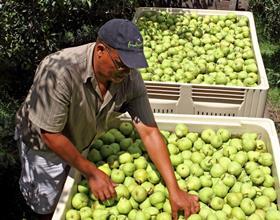 The new South African apple and pear season has started and early indications are that the country’s export crop will show a slight increase compared with last year.

The harvest continues until May and exports will continue through to the beginning of the next crop in January next year, with volumes at that stage still being shipped into Africa.

Industry body Hortgro said that apple exports were expected to increase by 4 per cent this year, with pears up by around 2 per cent.

“The pomefruit harvest is under way with positive expectations for 2021,” the organisation stated. 'This is despite some hail damage which occurred recently in the Langkloof region. “Last year saw a much better winter with enough rain in the majority of the production regions.'

Cooler weather during spring and the flowering period have contributed to the positive expectations.

“Growers in general are excited about the season ahead as the colour of the fruit and the packout from the orchards look promising,' Hortgro continued, noting that the season was estimated to be five to ten days later than last year.

“Overall, most apple varieties are expected to show an increase on the 2020 harvest,” the industry body continued. “Young orchards coming into production, as well as the favourable weather conditions, have positively impacted the export crop estimate.”

The pear export crop was forecast to come in at 17.14m cartons, which, if it materialises, would be the largest export volume for four years.

Hortgo said that at this stage it seemed that the Packham’s Triumph volumes, up 6 per cent from last year, and Abate Fetel were returning to their normal yields.

The Early Bon Chretien pears have been negatively affected by russeting and a decrease of 14 per cent is estimated compared to the previous season.

When they concluded their harvest last year, the country's growers would have been relieved that they did so with relatively little damage as a result of Covid-19.

They would certainly not have expected that they would start their 2021 harvesting and packing season under the disruption of the second wave of the virus, which is sweeping the country more aggressively than the first.

In general, industry leaders have said that they learned valuable lessons last year. Logistical problems experienced at the port of Cape Town have been sorted out and they are hoping that they will have another season of good demand from international markets in 2021.