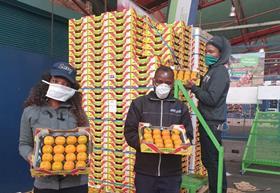 South Africa’s government has announced relief for embattled informal traders who have been badly affected by the coronavirus lockdown and restrictions on movement.

Sources in the sector have said the government enforced lockdown came as a serious blow to informal traders who visit wholesale markets regularly to buy fresh produce, which is then supplied to street vendors across the country's sprawling townships.

Traders in countries bordering South Africa who also rely on the wholesale markets for a range of products are also affected by these restrictions.

An amendment to South Africa’s lockdown regulations that will allow informal traders with the necessary permits to resume operations was announced by the government. Retracting the measures and getting things back to normal is easier said than done.
The scramble to get permits caused mayhem at the council offices in Johannesburg. Huge queues develop which made a mockery of the measures regarding social distancing. The process was eventually suspended and the council said it would only issue permits to those already registered.
Observers in the South African local market says that it is better not to disrupt the informal trade. “It has its own energy – with around 90% of sales on the Johannesburg and Pretoria fresh produce markets ending up at stalls in the streets of the township.”
At Johannesburg Market, where it is reported that some 1600 traders regularly buy their fruit, there is a two-market system – which serves the informal trade. “Fruit moves from the market floor to the Mandela Informal Market next door – and from their to the street markets and the informal traders who await their supplies everyday.
The Institute for Poverty, Land and Agrarian Studies (PLAAS) recently released a report titled ‘Food in the time of the coronavirus: why we should be very, very afraid’, which stated that the lockdown was already having an impact on the capacity of poor people to access food.
This was especially true in the “informal food economy”, including small farmers, street vendors and spaza shops, which PLAAS described as “important in meeting people’s daily food needs”.
The research indicated that the street food trader sector supported approximately 500 000 livelihoods nationally, accounting for 40% of township economy.