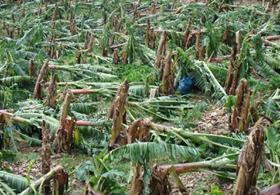 St Lucia's banana industry in particular has suffered major losses, according to agriculture minister Ezekiel Joseph, who described it to local mediaas being 'wiped out', adding that it could take some eight months before the industry recovers enough to resume exports.

Mr Joseph added that, if there were to be a need for 'total rehabilitation' of the industry, the country should be able tocapitalise on a period when WINFRESH and the key UK market have high demand for bananas.

'So, whilst there are a lot of sad stories, there are opportunities for a country to capitalise on what is happening right now,' he added.

On a wider scale, prime-minister Stephenson King has revealed that it could cost up to US$500m (€358m)to repair the infrastructural damage caused by the Hurricane, Caribbean 360 reported.