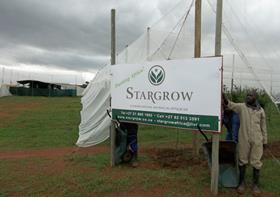 Lesotho, the country surrounded on all sides by South Africa, is best known for its magnificent Maluti Mountains, snow in winter and beautiful vistas. However, agriculture is also playing a major role in the lives of the people.

South Africa’s Stargrow Group, through its subsidiary Stargrow Africa, has been involved with the mountain kingdom for some time by supplying fruit trees for development of commercial orchards, and offering urgently needed technical expertise.

Now the Stargrow Group has signed a new cooperation agreement with the Lesotho National Development Corporation (LNDC) and the Private Sector Competitiveness and Economic Diversification Project (PSCEDP) to improve Lesotho’s horticulture industry, with some M150m (R150m) to be invested in up-scaling the sector.

In terms of the memorandum signed, three deciduous fruit pilot projects in Leribe at Likhothola, Mahobong and Likhetlane will be turned into a special vehicle company.

Under the partnership deal, the LNDC will identify and secure land for the project. It will also work together with Stargrow to finalise the business plan as well as raise and contribute equity for the special vehicle company. The PSCEDP will provide technical, marketing and distribution of the existing deciduous fruits pilot projects.

It will further engage with the pilot projects to secure their understanding and buy-in on the proposed incorporation of the pilot farms into the planned investment by the LNDC and Stargrow.

“In South Africa the industry contributes R12bn and hires thousands of people,” Motala said, adding that it is was viable industry for Lesotho and it could deliver the desired economic results.

“The ease of doing business coupled with good soil and temperatures would make it easy for us to do our work,” Motala said. He noted that they hoped to have planted at least 5ha of apples by next month.

Motala explained that the local deciduous fruit industry was already doing well and what Stargrow was bringing was the tweaking of the aspects of skills transfer to ensure the success and sustainability of the industry.

The Project Manager at PSCEDP, Chaba Mokuku, said this was a milestone for the local industry as the initiative would play a significant role in the alleviation of poverty and reduction of unemployment.

Mokuku said the project would bring in inclusive growth that benefited many people. According to him the pilot projects already employ hundreds of people who are able to provide for their families. He said the World Bank and the government were ready to support the project.

LNDC CEO, Mohato Seleke, said the corporation was shifting its focus from textiles and was moving into commercial agriculture.

He said the development of the horticulture industry was critical as it would impact even those who were previously not incorporated into the mainstream and those who have land but do not have resources to put it to good use.

Seleke said there were further plans meant for the development and commercialisation of agriculture.

Stargrow Africa is a company that focuses on the supply of plant material, agricultural equipment, irrigation and technology to African markets.