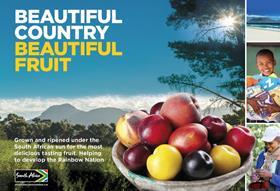 The market development programme for South African stonefruit in the UK and Germany has, over the past ten years, brought significant success to the sector.

Now, after expanding to France and the Middle East some years ago, South Africa is looking to further consolidate its position in these two countries.

3Industry leaders have said that the programme has not only imparted significant information about South African stonefruit and the country itself in the UK and Germany, but it has also focused the minds of growers and exporters on further improving the eating quality and taste experience of the fruit, particularly in Germany.

Jacques du Preez, industry spokesman, said the programme was well-established in the UK and Germany. “We did also start this programme in France and the Middle East, and we are pleased with results so far,' he noted. 'This season we hope to make further progress in these areas.'

Hortgro said that since introducing a pilot project to promote South African plums in 2009, the South African pomefruit and stonefruit industries’ Beautiful Country, Beautiful Fruit campaign has grown in stature to become one of the most significant in the UK and German markets.

The initiative is helping to build shopper loyalty for South African fruit by highlighting its unique freshness, eating quality and specialty varieties, as well as the ethical and environmental reasons for customers to choose the country's stonefruit and topfruit during its season.

It is an integrated campaign, Hortgro outlined, promoting the fruit to shoppers in stores with tastings and other activities, online and in the media, including social media.

During the past season, several activities highlighted South African fruit to British and German shoppers, including programmes in supermarkets such as tasting sessions, with information and recipes given away in addition to fruit samples, on-pack competitions and offers, as well as advertising at the point-of-sale and online.

With a rise in stonefruit volumes forecast for the coming season, the campaign will again play an important role.

The industry itself, which has in the past been restricted by what was considered older generation varieties, will export increasing volumes of newer stonefruit cultivars.

These exciting varieties come from a number of international and local breeding programmes which are transforming the industry and will lead it into the future.

Producers in both the topfruit and stone fruit categories have already approved plans for the campaign to be expanded into the Middle East and the Far East markets.