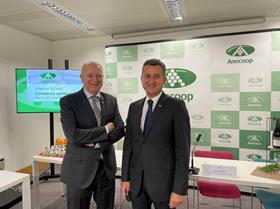 Anecoop, Spain’s biggest fruit and vegetable cooperative grouping, posted a turnover of €790.3m for the 2020/21 campaign, an increase of 2.6 per cent on the previous year. Consolidated turnover for the whole group rose by 3 per cent to €994m.

The company sold 845,410 tonnes of produce, an increase on 2.4 per cent on the previous year, while the consolidate sales volume remain unchanged at just over 1m tonnes.

Presenting the results at the company’s AGM on Friday, president Alejandro Monzón said that “in addition to the increase in volume and revenue, 2021 is the year in which we achieve the highest returns for our partners”.

2020/21 also saw the creation of the ProVega citrus alliance by three Andalusian member cooperatives, and the expansion of Green Fruit, the biggest citrus alliance within Anecoop, through the incorporation of Copal, as well as Anecoop becoming a signatory partner to the United Nations Global Compact for Sustainability.

Managing director Joan Mir said the 2020/21 campaign had been a success but warned that “the first six months of the present season have brought us down to earth with a bump”.

Commenting on the current trade outlook, Mir noted: “not even the most creative director in Hollywood could have dreamt up how the season is unfolding”.

Several factors have combined to create a perfect storm, including across-the-board increases in production costs; the closure of the Belarus market; Russia-Ukraine conflict; container shortage; collapse of the citrus market due to the big rise in imports from South Africa; inclement weather; a greater incidence of new pests on persimmon and citrus production and the ongoing truckers’ strike.

“I don’t know if this is a thriller or a horror film we’re living through right now. But we will keep going forward, keep talking to our customer and keep growing,” Mir said.

Mir encouraged Anecoop’s partners to continue taking steps towards greater integration, while calling on more support from the state to ensure that agriculture 'returns to the path of competitiveness, with the confidence that we have the best climate and the best land to produce the best product'.

Looking ahead, Mir said it was necessary to “rethink the current structure, something for which a change of mentality is urgently needed. Only a profitable sector will be attractive to young people and will favour a successful generational change”.

With regards to the challenges faced by citrus producers, Mir emphasised the need a strong, powerful interprofessional association to lobby on behalf of the whole sector.

Earlier this year, Anecoop launched a marketing campaign in Spain to promote homegrown citrus sold under the Bouquet brand, but Mir said it was necessary to carry out proper marketing campaigns for the entire industry.