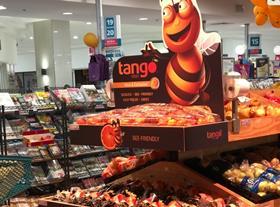 South Africa’s Advertising Regulatory Board (ARB) has ruled that Tango mandarins' claim that its fruit is ‘bee-friendly’ is misleading.

In a statement Citrogold, the cultivar management company for the mandarin variety Nadorcott in South Africa, confirmed that South Africa’s Advertising Regulatory Board (ARB) found that the ’bee friendly’ marketing strategy adopted by Eurosemillas SA, Stargrow Marketing and other fruit suppliers of Tango Fruit in Shoprite Checkers was misleading and contravenes the Advertising Code of Practice.

“The importance of fair and responsible advertising was highlighted in the ruling of the ARB when it advised its members, including retailers, not to accept marketing and advertising material of Tango citrus fruit that include the claim ’bee friendly',' the Citrogold statement said.

The advertising was ruled to be misleading in that the ’bee friendly’ message, according to the ARB, is ambiguous at best or inaccurate at worst.

“The ‘bee friendly’ message also falls foul of suggested environment benefits of the claim in that the message does not sufficiently qualify how or why Tango citrus fruit is ’bee friendly’,' Citrogold continued.

The owners of Tango launched a local media and advertising campaign in South Africa last year when the first programmed sales for the new mandarin variety was launched in stores of one of South Africa’s leading retailers.

In an increasingly competitive mandarin landscape it must be noted that there is already the high profile and very successful ClemenGold-branded Nadorcott campaign, which has been running for some time in another leading supermarket, Woolworths.

Elsewhere, leading retailer Pick n Pay has also for the past two years adopted a focused strategy on mandarins. Checkers also has its own Novagold lines that it is promoting.

The complaint by Citrogold stated that the ‘bee-friendly’ slogan is misleading because it wrongly implies that no pesticides that are harmful to bees are used in the commercial production of Tango.

It also seeks to make a false distinction between the normal protocols for pesticide spraying that are required for the commercial production of Tango on the one hand, and other varieties on the other hand, when the protocols being applied are the same.

In its ruling the ARB concluded that in this particular case the advertising did not sufficiently qualify or explain the way in which the product can be considered ‘bee-friendly’. “In the circumstances,” the verdict reads, “the Directorate has no choice but to find that the claim is misleading.”

The ARB advised its members not to accept advertising for Tango citrus fruit that includes the 'bee-friendly' claim.