Tradition takes a back seat 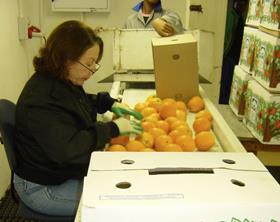 America’s Independence Day on 4 July has always had a special place in the lives of the South African growers who annually ship their citrus to the US.

This day normally marks the real start of the Summer Citrus from South Africa campaign which was launched in the early 2000s and has been an extremely successful market development programme.

With the development of this campaign, another tradition of exchange between South Africa and the US became part of the export programme.

From the start of the South African season inspectors from the US Department of Agriculture travelled to South Africa to inspect the fruit before it is shipped from Cape Town. Over time a good number of them visited the Cape and also enjoyed the company of the local citrus industry.

At the same time, growers from South Africa travelled to Philadelphia, the discharge port of South African citrus, where they spent three weeks at a time to assist the importers and trade and to give real-time information to their fellow growers back home.

Industry leaders such as the late Gerrit van der Merwe and Piet Smit, were the originators of the programme. Both of them also spent time working in Philadelphia and became very well-known figures in the US fresh produce business.

This year, for the first time, this exchange has been interrupted. The South African authorities and their US counterparts had to make emergency plans for the inspection and clearing programme to continue, while South African growers will this year stay at home.

At Karnemelksvlei near Citrusdal, ancestral home of the Van der Merwe family, the 4 July has not been the same since the untimely death of Gerrit van der Merwe two years ago. Until then Gerrit would every year call his fellow growers together under the giant oak tree next to the homestead for their own 4 July celebrations.

In the time of Covid-19, with most exporters suffering major delays in their shipping programme, the US citrus campaign remains on schedule.

The US vessels are loaded at the old fruit terminal in Cape Town directly from cold stores in the interior. The quay is privately operated.

Back on the farms, in the Citrusdal Valley where the biggest proportion of the fruit is grown, Covid-19 infections have been low, mainly due to rigorous enforcement of health rules. “It is like a military operation,” said one grower, “but we have been managing to keep things on track.”

The South African growers exporting to the US said that they have a bumper crop of excellent quality fruit. “We have so much to be thankful for,” said senior grower Johan Mouton. “We just have to manage ourselves throughout this season.”