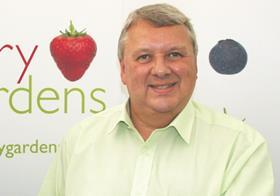 The UK berry sector will make up for slower than expected growth over the past year as it resumes its recent impressive rise towards the billion-pound mark in terms of sales this coming season.

That's the view of Nicholas Marston, managing director at Kent-based marketer Berry Gardens, who sees the market staging a strong recovery in the coming months following what he describes as particularly poor trading during the summer.

'This setback resulted in only a modest increase from 2012, however `the market` has the potential to increase well up to a billion in value as the category continues with all the benefits berries have to offer,' Marston told Eurofruit.

Strawberry sales reportedly fell in both volume and value terms between mid-November and mid-February, due mainly to a shortfall in supply from Morocco after poor weather led to a late start to the season.

Other berries across the category have apparently seen steady growth in sales, with new varieties of blueberries and blackberries contributing in particular to the category's notable growth rate.

“The continued growth in blueberries is very exciting and it would appear that the rest of Europe are beginning to see an impressive growth rate,' said Ian Waller, director of Total Berry.

Total Berry will launch new blueberry varieties produced in Morocco this year as well as a super-sweet blackberry called Incentive.

'Sold in the English season, like our Maravilla premium variety, they are large with a good shelf-life and exceptionally tasty,' he said.

Supplying 65 per cent of the UK market for raspberries, Berry Gardens has reported average growth of 15 per cent in sales of the fruit over the past few years, he added.