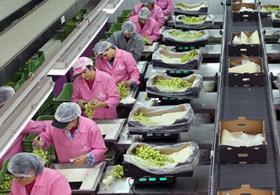 Portuguese grape producer/exporter Vale da Rosa has invested in new weighing and packing technology at its Alentejo packhouse to enable it to respond more effectively to customer demand in the season ahead.

In total the company has invested €700,000 installing new thermo sealing and flow pack machines, upgrading its weighing machines and restructuring the cooling system in the area where the grapes are prepared.

“After introducing the Marco weighing system in packaging lines last year and given the excellent results in terms of productivity, the same technology will be applied to the entire packhouse contributing to greater profitability of the processes,” the company said.

“We are also going to make improvements in the working lines system allowing greater flexibility as well as the optimisation of procedures.”

The investment also extends to the restructuring of the whole cooling system in the packaging facility that will allow a reduction of the total area temperature to about 12oC, thereby ensuring a significant improvement in the operating conditions of the grape.

Vale da Rosa recently developed a new experimental field where it is testing more than 20 new varieties from the US, Israel and South Africa. If successful, commercial production will begin in three to four years.

The company’s production and packhouse are located in the heart of Alentejo in southern Portugal.

“This convenient location, just 30 km from the A2 motorway and 80 km from the Spanish border, allows us to get our grapes to market in excellent condition anywhere in Europe,” the company said.