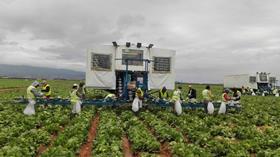 Spanish fruit and vegetable exports grew 7.7 per cent in value last year to €14.594bn according to the full-year figures released today by Fepex. Export volume fell 2.8 per cent to 13m tonnes.

Watermelons and melons grew by 7 per cent and 1 per cent respectively in value to €444m and €321m.

By destination, the European Union was the destination of 93.5 per cent of exports.

Fepex said the data reflected the sector’s strong reliance on exports and in particular the European market.

It also showed a decline in key products such as tomatoes due to the growth in EU imports from third countries whose production seasons overlap with Spain’s.