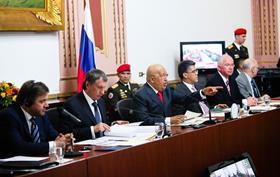 Venezuela is to export bananas, flowers, coffee and cacao to Russia under a new bilateral agreement revealed by President Hugo Chávez via a telephone announcement.

The deal follows a visit to the South American nation by Russia’s vice-president Igor Sechin, according to a press release from the nation’s presidential palace.

The banana venture is said to include the establishment of joint venture between the two nations which will set up production across 1,174ha, with the goal of eventually reaching 5,000ha.

“Apart from the development of projects in the field of agriculture, it’s expected that this will be accompanied by the production of plastic cartons, fertilisers and port logistics,” explained vice-president Sechin.

“Some 60m boxes of bananas will be exported from Venezuela, so it’s a really serious project which will generate 20,000 jobs.”