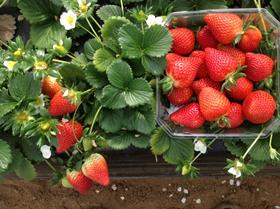 The company, which holds the license for both varieties in southern Europe and North Africa, said the warmer climate highlighted the need for plant materials adapted to the conditions of different growing regions.

“In Huelva and Morocco our varieties have had an excellent performance despite having had weeks in October with more than 30oC,” said Jorge Muñoz, commercial manager at El Pinar.

“Its rusticity and adaptation to all types of soils give it that security that the producer and the marketer need.”

El Pinar said plantings of both varieties have increased significantly this season, not only in Huelva but throughout the Mediterranean Arc.

“In the case of countries such as Morocco, Italy and Greece, the performance of both varieties has been equally excellent during these first months, despite the fact that, as in Spain, high temperatures marked the transplant phase,” the company said.

Other new strawberry varieties being developed by El Pinar include Renewal and Alegría, of which several trials have already been carried out with producers this season.