Zambia 'catching up' with rival Kenya 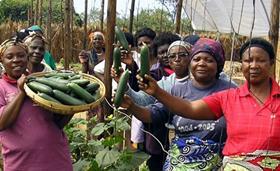 Zambia could reportedly emerge as a major rival to Kenya in the horticultural export trade (Photo: Commercial Agribusiness for Sustainable Horticulture)

The volume of fruit shipped by Zambia to Europe could eventually catch up with that exported by Kenya, driven in particular by demand for products not traditionally grown in the country, such as pinneapples.

That’s according to figures from the University of Nairobi's Department of Agricultural Economics, which were unveiled at a recent horticultural event held in the Kenyan capital.

The figures suggested that the volume of Zambia’s fruit exports to Europe totalled more than 180,000 tonnes last year and are expected to grow to 250,000 tonnes in 2015, encouraged by growing demand particularly in the UK.

“Non-traditional crops such as pineapples are playing a big role,” commented Brenda Chuma of Zambian exporter Horticultural Exports Ltd. “The export volumes were high last year and they are expected to improve further in coming months.”

According to Chuma, British supermarkets are now paying at least a 30 per cent premium on conventional prices of babycorn and fine beans. “This is a major motivation for exporters. It has helped cover lower yields and extra rejects in points of entry among Zambian exporters.”

Although Zambia’s largest horticultural export remains cut roses, Chuma is confident that the country can rival Kenya as a key source of tropical and high-care fresh prepared produce.

“If you ask me if we can beat Kenya in the European market, yes we can. For instance, we never used to grow pineapples, now we are and we are exporting the fruits to Europe. Exports of mangetout and sugarsnap vegetables are also widely supplied in the UK.

“Also, most of our crops are organic crops. In fact, we are the leading African country in the export of organic horticultural crops.”

Encouraged by the rising demand, Chuma said her company was training new staff and investing in new plantations.

She added that the formation of horticultural associations was helping introduce farmers to new crops and boosting export volumes to Europe.