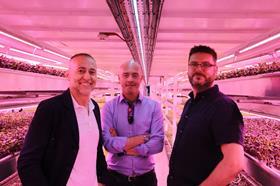 Following a crowd-funding project to gain investment, and 18 months of trials, the first phase of the farm is now in the final stages of preparation for commercial supply.

Crops are grown in a sealed clean-room environment with a bespoke ventilation system, advanced lighting and sophisticated irrigation that enable the farm to produce micro produce at a very low energy cost.

Supported by big names from the commercial salads industry, including G’s Fresh and Florette, the concept has also attracted huge interest from consumers, retailers and urban planners across the world. Its mission is to deliver fresh produce with zero effect on the environment, with all energy sourced from green suppliers.

Mayor of London, Boris Johnson, who supported the original idea through his London Leaders business start-up programme, said: “This is a fine example of the dynamic startups that are helping London lead the world in green business innovation. I wish Growing Underground every success.”

Co-founder Dring said: “Phase one represents more than £750,000 investment in sustainable urban farming for London and we’re delighted to be fulfilling our first orders within weeks.”

With vacant neighbouring tunnels to the Growing Underground site, the project has room to expand and Roux confirmed the team are “ambitious for growth”.

“It’s great to be involved in this ambitious project, for which we have equally ambitious growth plans. Above all, it’s fantastic to be able to source produce that is so fresh in the heart of Britain’s largest city,” he said.

“I’m looking forward to creating my first dish using produce from the world’s first underground urban farm, less than two miles as the crow flies from the heart of London.

The tunnels were used during World War II as a bomb shelter for London residents. The current site was designed to accommodate 8,000 Londoners.