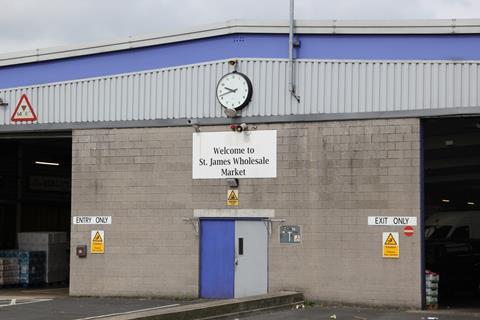 Bradford Council announced on Wednesday (5 October) the signing of an ‘Option to Purchase’ unused former landfill land at Staithgate Lane to the south of the district to build a new larger, greener and state of the art northern food hub to replace its current St James Wholesale Market.

Bradford’s St James Market is already the biggest wholesale market site in Yorkshire and the North East, and this latest phase means the council can push ahead with its ambitions to create a new larger and more accessible modern wholesale market as part of a northern food hub which would create more jobs and strengthen the local and regional food distribution network.

The current wholesale market is fully let and the land at its present location is at maximum capacity. The new site satisfies the demand from existing businesses for expansion and gives the opportunity for new businesses to open to take advantage of over 500 local and regional retailers that use the market each week.

The existing market supports over 30 small and medium size businesses and is located on an eight acre site on the edge of the city centre, just off the congested Wakefield Road (A650). It generates about £50m turnover per annum and provides employment for over 400 local people, supplying hotels, restaurants, cafes, takeaways and catering suppliers as well as independent supermarkets, shops and market stalls.

The signing of the ‘Option to Purchase’ document means the council can forge ahead with its vision to transform the St James business from the traditional model of a wholesale market to develop a massive food distribution centre supporting and accessing the independent retail, catering and food service sectors across the whole of the north. The new facility would create a Northern Food Hub with fresh and processed foods including meat, fish and fruit and vegetables as well as a bakery and flowers from a site with fully modernised infrastructure, close to the major northern transport links.

The new Regional Food Hub at Staithgate Lane would capitalise on its excellent location close to the M62 and other major arterial road networks allowing access to the whole of northern and central England.

Moving to the new location and a modern operating model give clear opportunities to create a green sustainable facility, cutting down on emissions and waste directly related to the buildings, facilities and transportation of goods, creating a streamlined supply chain removing polluting vehicles from the city centre and residential areas.

Councillor Alex Ross-Shaw, Bradford Council’s Executive Member for Regeneration, Planning and Transport, said: “We have huge ambitions for the Bradford district including being the leading clean growth city district and creating this new larger, greener modern food hub serving the whole of northern and central England and beyond forms part of that plan. Relocating from the current St James market site frees up land in the city centre for a much needed through station in the city centre which Prime Minister Liz Truss recently pledge commitment to. Delivering on that commitment would be an important step towards truly ‘levelling up’ the north.”

Nigel Jenney at Fresh Produce Consortium, which includes some of the country’s top food & flower importers and growers, said: “The signing of the ‘Option to Purchase’ for this land to create a northern food hub is a significant move and would promote food security and a streamlined supply chain.”