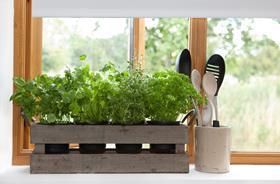 With Generation Y on its radar, and claims that the category is outperforming total produce, curbing enthusiasm isn’t required when it comes to the fresh herb market right now.

Described by one industry insider as an “exciting place to be”, herbs are riding the crest of wave thanks to trends towards healthier eating, and new culinary flavours that give producers great scope to stretch the boundaries of product development and trial herb varieties.

Nevertheless, herb growers share the same challenges when it comes to weather.

Tony Reid, head of marketing at Vitacress, says: “It’s been very cold across southern Europe and Israel; areas where we source some of our winter supply.

”We were in the same position last year where storms wiped out crops, however this year, to guard against the same situation, we have been growing in polytunnels in Kenya where we can control destructive elements and protect the crops.”

On the back of the ever-strong Christmas period, the New Year has seen demand for herbs remain strong, according to Vitacress, despite challenges on some lines due to the usual struggles on sustaining volume in winter.

January and February are presumably very good times to strike for herb producers, with some consumers still counting the cost of festive over-indulgence.

Reid notes: “The marketplace is continuing to see healthy eating grow alongside the demand for alternatives to salt, sugar and fat, whilst maintaining full on flavour. Herbs are a superb way of delivering dishes that pack a punch; instead of butter and salt you can add chives to potatoes or coriander to carrots instead develop flavour.”

As for how the category can be grown beyond its present position, Reid suggests: “There is no simple answer to this - it is a combination of consumer education, home cooking and retailer communications.

“The next generation, ‘Generation Y’, are a savvy bunch. They buy into brands and companies they believe to be trustworthy and imbue their own integrity. On the whole, they are big advocates of healthy living, fresh produce and are less scared to try new things.

“To target this generation we look to create collaborative partnerships with customers and key media channels to communicate the breadth of versatility and benefits that herbs have to offer.”

Coriander and parsley remain the most popular fresh herbs, and are used most frequently in recipe books, but new varieties abound in the market – Vitacress recently launched Isabella Basil into Tesco, and is currently working on a number of other herb varieties which will be launched later in the year.

Elsewhere, more old-fashioned varieties such as sage, for example, have enjoyed a 20 per cent increase in value over the last year, according to Kantar Worldpanel figures.

The same research body also reveals that household penetration for fresh herbs has increased by 2 per cent over the past year, and the number of buyers to the category has risen by 3 per cent.

Going forward, Reid tells FPJ: “We are always looking at ways to innovate; be it the breadth of our range of herbs, the growing process or extending the life of the products for the consumer.”

If fresh herb innovation and marketing remains strong and well-directed, dusty cupboard-dwelling pots of dried herbs could soon be joining Angel Delight and prawn cocktails in the wastebin of British food history.

For the 52 weeks ending 4 January, 2015, the value of total fresh herb sales was £52.3m, according to Kantar Worldpanel figures.