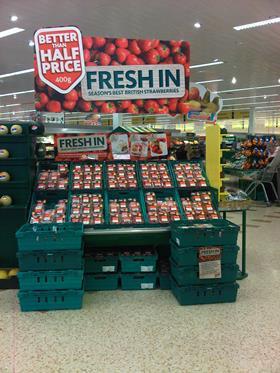 New research reveals Brits think buying local produce will cost more, when in fact it can save you significant money each week, the UK and Ireland Mushroom Producers association reports.

A new poll has revealed that over 40 per cent of UK consumers believe that buying British and Irish produce will cost more money.
However, buying British produce could save families a whopping £136 each week on their shopping bill, the group says.

To demonstrate the environmental impact and financial gain of buying local, The UK and Ireland Mushroom Producers challenged a family of four to swap imported produce for British and Irish for two weeks.

Noel Hegarty, a spokesperson for the UK & Ireland Mushroom Producers commented, “Many people are unaware of the financial and environmental benefits of buying British.

“The UK and Ireland Mushroom Producers provide sufficient British and Irish mushrooms to fulfil the nation’s needs, although some supermarkets still source internationally.”

Leading nutritionist Rob Hobson says, “Knowing what is in season and choosing locally sourced produce also means shoppers can be sure to pack in the most nutrients, as those which have travelled fewer miles will be fresher and of higher quality.”

British Food Fortnight, taking place this year between 18 September and 3 October 2021, is designed to celebrate the diverse home-grown produce that the UK has to offer and is urging people to support local farmers and growers in the process.

'Many people do not think about their carbon footprint when it comes to the food they eat, however, popular fruit and veg such as the trendy avocado, can travel up to a staggering 6,263 miles when out of season,' the group added.

'In fact, British vegetables in season are also much cheaper as you buy it when it is in abundance and has not travelled long distances to reach our shelves.'

The UK & Ireland Mushroom Producers report comes as UK fruit and vegetable growers report they are cutting their planting for 2022 after unprecedented labour shortages has led to widespread wastage of produce, with tonnes of crops - from brassicas to softfruit - left to rot in the fields.

UK producers say the government's pilot seasonal worker scheme introduced to provide labour after Brexit has not been sufficient, while broader labour shortages have resulted in European pickers with the right to work in the UK finding jobs in other sectors.

Now growers are planning smaller harvests for next yer, expecting that the balance will be made up by imports, the NFU said.