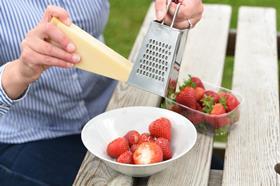 AVA Berries chief breeder has revealed British consumers should ditch the cream on their strawberries and instead sprinkle them with Parmesan cheese.

Lucy Marie Slatter claims that the hard cheese, usually reserved for pasta dishes, is in fact the perfect pairing with strawberries as it is known to bring out the berry’s unique flavour characteristics.

Slatter, who is head breeder at AVA Berries, says firm favourite pouring cream should be kicked to the kerb as it does nothing to enhance flavours. It's not just the Italian staple that goes well with strawberries, she adds, but herbs and spices such as basil, mint, black pepper, and chilli pairing well too - along with balsamic vinegar, and even crab.

But it seems it's not just with toppings that Brits fail to get the best out of their strawberries.

Research commissioned by AVA Berries revealed that nine out of ten Brits are storing and preparing their strawberries wrongly. More than a third (37 per cent) remove strawberries from the fridge and wash with cold water, which Slatter says drastically reduces the sensory experience.

The study found that only one in ten Brits remove strawberries from the fridge and leave to reach room temperature before tucking in. Slatter says that leaving strawberries to come to room temperature for at least an hour is crucial as warmer temperatures allow taste buds and nose sensors to take full advantage of the complex flavours and aromas in strawberries.

Consumers should also treat whole strawberries as though they're an expensive whisky and 'nose' the fruit, according to Slatter. Smelling your strawberries helps you to pick out flavours and aromas that you wouldn’t be able to detect through eating alone.

Slatter said: 'It may seem a little eccentric to top strawberries with parmesan cheese and pass on the cream, but if you're adventurous enough to give it a go, you won't regret it.

'By choosing this cheesy topping, and allowing your strawberries to sit at room temperature before serving, you'll have a delicious bowl of strawberries that will be the envy of everyone - including those munching on them at Wimbledon.

Of the 2,000 Brits surveyed, many said they'd tried the berries with traditional pairings including chocolate, cream and yoghurt.

A quarter (25 per cent) admitted they paired their strawberries with 'unusual' ingredients including black pepper, balsamic vinegar, and even peanut butter.

Adventurous foodies also listed nettles, mustard, beans, haggis sausages and fish fingers as pairings they'd given a go, with one revealing they'd even rustled up a strawberry and anchovy milkshake.

To help consumers navigate all these different pairings, AVA Berries has developed a strawberry flavour wheel that shows the different flavour characteristics of this deliciously complex berry and which recipes would be worth giving a try.

AVA strawberries, grown in Scotland, are currently sold as premium lines in some of the UK’s top supermarkets, find them in M&S stores and Aldi’s Specially Selected, Morrison’s The Best, Co-op's Irresistible, and Sainsburys’ Taste The Difference ranges.