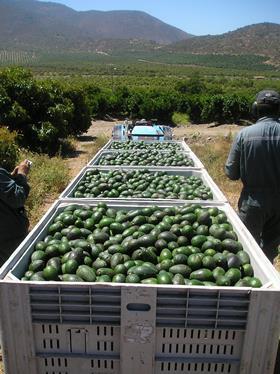 Chilean avocado growers have hit back at claims that they are leaving local communities without drinking water, calling them “an injustice”.

Avocado producers, whose crops end up in British supermarkets, were accused of building illegal pipes to steal water as well as intimidating protestors by activists and villagers in the Petorca region of Chile, publicised in The Guardian and other European news sources.

Yet a delegation of Chilean avocado growers from the province are so incensed by the accusations that they have travelled to Europe to assure their customers they are operating fairly.

They state the main cause of the water shortages in the region was a drought between 2007 and 2014, which prompted farmers to destroy six million trees in response.

“This is an unfair situation,” explains Ronald Bown, chairman of the Chilean Fruit Exporters Association. “We want to inform clearly to our importers, sellers and consumers, to give clear information about this situation, and let them know what the facts are.”

Bown and a group of growers and exporters accuse The Guardiannewspaper of spreading misleading information about avocado production in their article.

One grower from the region, Jose Luis Oyanadel, said: “I think the situation described is the opposite of what is actually happening in Petorca, which has been one of the most drought affected areas, we have given priority to drinking water to local inhabitants.”

Alfonso Rios, of local irrigation group Agropetorca said the illegal pipes had been closed for a long time ago, and Chile was littered with them. “You can ring up residents of Petorca and I will pay you if you find someone without water running from their tap,” he added.

Regarding reports of death threats made to people speaking out against the avocado growers, Francisco Contardo Sfeir, general manager of the Hass Avocado Committee, said they have not had any official complaints.

“The Guardian quotes a human rights report which doesn’t reference Chile. There’s no farmer or company that has sued us, no threats have been made into formalized complaints. It’s made a lot of noise, but we don’t have any facts that can be demonstrated. We don’t have anything that proves this.”

Bown says that area is an agricultural region and the “defamatory” campaign would hit small and medium sized growers the hardest.

He added that growers are subject to several regulatory bodies, including the Rainforest Alliance. The British Retail Consortium said it would investigate the claims made in the report, as did the retailer Lidl.