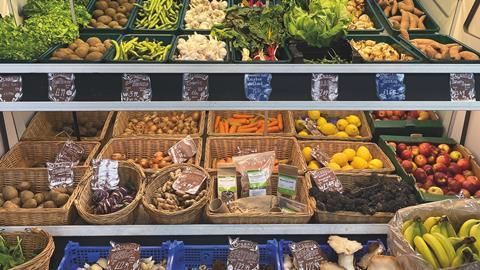 Eat Well for Less? star Chris Bavin has announced his plan to help set up a trade body to promote UK greengrocers and compile a national database to make their businesses easier to find.

Bavin, who ran a greengrocer called ‘The Naked Grocer’ in Surrey for a number of years, wants to launch a website with a ‘find your local greengrocer’ function to make it as simple as possible for the public to locate independent produce retailers, greengrocers, fruit markets and veg stalls.

It is estimated that there are around 3,000 greengrocers in Britain, but the exact figure is unknown, and with no trade body or collective voice, businesses generally work in isolation.

As well as launching a search function, Bavin is keen to set up a trade association that runs marketing campaigns, secures collective discounts for members, and possibly one day enables doorstep deliveries via a platform such as Deliveroo.

“I had a greengrocer for many years and also supplied the wholesale markets for the best part of 25 years,” said Bavin.

“It’s a sector I dearly love but quite often, when I talk about supporting greengrocers, people say they don’t know where their nearest one is.

“When I’ve looked for them online, I’ve realised there are so many businesses that have no social media presence or no website.

“I feel the need to create an association where we can consolidate all the information, bring all the members together, and then find ways of using the power of the group. If we brought all 3,000 greengrocers together, that gives a real strength and a real collective power.”

Bavin thinks now is a great time to build the network since people’s shopping habits “could potentially be changing”.

“Covid was a horrendous time but a whole new generation found their local independent retailers and greengrocers,” he said. “Post-pandemic, lots of people went back to their existing shopping habits, but it’s thought that around 20-30 per cent of the sales increase was maintained. Let’s go at that again.

“People are feeling the pinch, people are tightening their purse strings, and this is a time when the independent fresh produce retail sector can show what it can do – and I think there will be a potential new audience for us again.”

While the project is still at an early planning stage, Bavin’s vision is for the trade body to comprise a board of greengrocers and be funded by sponsorships from major fresh produce brands as well as a small membership fee from greengrocers of around £10 a month.

The “long-term dream”, he said, is to create a marketing fund to promote greengrocers and then work as a collective to secure membership discounts on equipment such as till units, vans, shopping bags and so on.

’Not going to be easy’

The biggest challenge, it seems, is reaching the hard-to-locate businesses in the first place and encouraging them to become members.

Bavin said his plan is to start by going through the wholesale markets, where the majority of greengrocers source produce from.

“I’ll also put out some messages on social media, but it might just require some boots on the ground,” he added.

“The reason this trade body is needed is also the reason it will be hard to achieve – lots of greengrocers don’t have social media, lots don’t have websites. It’s not going to be easy, but we’re going to give it a go.”

As well as hopefully boosting greengrocers’ revenue, Bavin believes the trade body could help tackle issues such as food waste and food poverty by creating a network of businesses that can collaborate on redistributing surplus produce.

“If we had a greengrocers’ trade association with lots of members, and then next year the same thing happens and we go into lockdown, I could get the addresses of all the people shielding, farm that information out to my members, and I promise you, they wouldn’t be able to eat the amount of food they’d be getting.”’