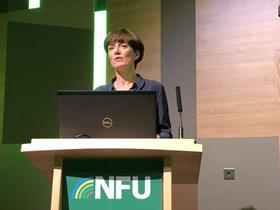 That was the damning assessment of Ali Capper, chair of the NFU Horticulture and Potatoes Board, following the eagerly anticipated announcement of the next stages of ELMs earlier this year.

The government schemes are designed to reward farmers and landowners for actions that benefit the environment and aid nature recovery, as Britain departs from the Common Agricultural Policy of the European Union.

Two new Environmental Land Management Schemes (ELMS) will attempt to halt the decline in species by 2030, with pledges to bring up to 60 per cent of England’s agricultural soil under sustainable management by 2030 and restore up to 300,000 hectares of wildlife habitat by 2042.

The Local Nature Recovery scheme will pay farmers for locally targeted actions which make space for nature in the farmed landscape and countryside such as creating wildlife habitat, planting trees or restoring peat and wetland areas.

Taken together with the previously announcedSustainable Farming Incentive, which supports sustainable farming practices, the two new schemes are designed to provide farmers and landowners with a range of voluntary options from which they can choose the best for their business.

Commenting on the the schemes in their current form, Capper said: “Where the criticism really starts is with the sustainable farming incentive. Two of the standards have horticulture in the name but there isn’t anything there that’s particularly relevant to horticulturalists.

“If you’re not making a BPS application – for example, if you’re an ornamental or glasshouse grower – you’re immediately excluded and disappointingly we’re being told that the soonest there will be a standard for specialist horticulture crops is 2025. I have volunteered to Defra officials to be part of any early discussions or trials, but I personally think it’s so disappointing that horticulture is being thought of last.

“Politically I can understand why because this is all about quick wins for government, which come from broadacre farming. They can say ‘we’re doing X thousand acres and planting this number of new trees’.”

She added: “The payments are not even going to cover the cost of implementing the measures the government is asking for. There’s certainly no incentive.

“If you were already doing a lot of that stuff, it might make sense, but the question is still whether you have the time or inclination to fill in all the forms and apply for it for that value – and that’s even at the advanced level. The value per hectare is very low for a horticulturalist.

“Everything at the moment is designed around income foregone. Forego your growing income, don’t plant vegetables, but do this instead – create pollinators for birds or plant your cover crops and you will get an income source through this scheme. That doesn’t work if you’re growing apples or strawberries or tomatoes.

“What we need is a scheme that says continue your growing, minimise you inputs, use your land area sparingly– which we all do anyway – and this scheme will incentivise you to grow using the best-practice environmental methods for your crop.

“I think there is a really long way to go for horticulture with ELMs but for me horticulture needs best practice environmental standards to be designed as an incentive, not on the basis of income foregone. I’m not going to take out orchards to plant cover crops. From a business point of view that’s completely barking.”

At the NFU Conference in Birmingham on 22 February, NFU president Minette Batters also expressed concerns that the Sustainable Farming Incentive would be underfunded, saying she was“incredulous to hear the secretary of state suggest recently that only one-third of the ELM budget will go to the SFI – a scheme he intends to be taken up across 70 per cent of farms”.

Defra secretary George Eustice admitted he had heard that the initial payments for SFI were often small, and said he was coming under pressure to go further, but doing this would involve “cutting the BPS payment faster than we already are”.

He added that additional standards, including a hedgerow standard and an integrated pest management standard, would be added to the SFI in future to allow farmers to access bigger payments.