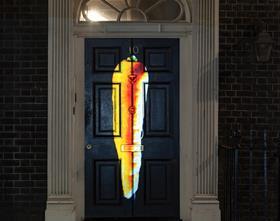 FareShare has beamed falling carrots onto landmarks across the capital - including the Houses of Parliament and No 10 - as part of a call to government to commit to food waste funding.

On the International Day of Awareness of Food Loss and Waste, the charity pointed out that two million tonnes of fresh, unsold food is wasted on farms and in factories every year, instead of being sent to charities supporting families in food poverty.

Landmark funding that enabled farmers to redistribute this unsold food to frontline charities ended after just one year, according to the charity, and calls to renew it have been rejected.

The stunt is part of FareShare’s #FoodOnPlates campaign, urging the government to continue and extend this funding. Without it, the charity says, 53m meals worth of food a year will be needlessly wasted – thrown into biogas digesters, sent to landfill or simply ploughed back into fields.

At the height of the pandemic, FareShare distributed over 130 million meals’ worth of food to frontline charities and community groups supporting the most vulnerable, and it is still seeing greatly increased demand in the wake of the crisis, particularly for charities supporting children and families, and for those providing emergency food aid.

MPs are being asked to support the campaign online (www.foodonplates.org), which has been shared by chefs Tom Kerridge, Hugh Fernley-Whittingstall and Prue Leith on Twitter.

“France manages to get 6x more unsold food to charities, yet, here in the UK, farmers are being forced to waste it.

“Globally, food waste is a huge environmental problem. If food waste were a country it would be the third-largest greenhouse gas emitter after China and the USA.

'That’s why, on The International Day of Awareness of Food Loss and Waste, and ahead of COP26, we’re calling on the government to show leadership on this important issue and reinstate this vital funding to get food onto people’s plates.”

Kerridge added: “Wasting food is always wrong, but on this level it’s a scandal. If farmers and food producers aren’t able to sell their food it should be going to the frontline charities who are crying out for it, not being dumped back in to the ground.”