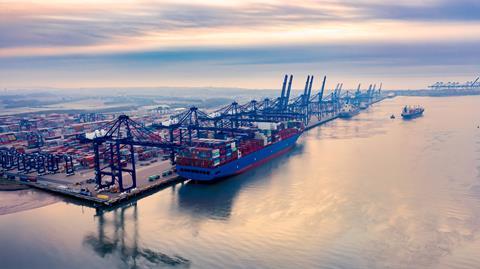 Workers at the UK’s largest container port have balloted to strike for another eight days starting later this month as their pay dispute continues.

Trade union Unite said workers at Felixstowe will strike from 7am on Tuesday 27 September until 6.59am on Wednesday 5 October, in what will be their second eight-day strike this year.

The union blamed management at the Felixstowe Dock and Railway Company for ending pay talks after announcing it was “imposing” a pay deal of 7 per cent on the workforce.

The union said the pay deal “is in reality a sizeable pay cut” compared to the retail price index of 12.3 per cent.

Unite general secretary Sharon Graham said: “Felixstowe and [owner] CK Hutchison are both eye-wateringly wealthy but rather than offer a fair pay offer, they have instead attempted to impose a real terms pay cut on their workers.

“Since the beginning of this dispute Unite has given its total support to its members at Felixstowe and that will continue until this dispute is resolved.”

The port’s management said on its website: “We are very disappointed that Unite has announced this further strike action at this time.”

The walkout will clash with action taking place at the Port of Liverpool, which will run from Monday 19 September to Monday 3 October.

Last month, Unite members at Felixstowe voted in favour of industrial action by a majority of 92 per cent as part of a pay dispute, with the union holding out for a 10 per cent pay increase.

Following eight days of strikes that began on August 21 - the first since 1989 - bosses at the Port of Felixstowe reportedly decided to implement their pay offer last week without agreement with union leaders.

It is understood Unite put the offer of 7 per cent plus £500 to their members over the last few days and an overwhelming majority of 82 per cent voted to refuse it.

As a result, members have served notice of a second wave of strikes at the port.

The crossover with action at the Port of Liverpool is considered to be a major cause of concern, with a number of cargo ships potentially being redirected to other ports or back to Europe, according to press reports.

A Suffolk shipping expert told the East Anglian Daily Times: “At a time when all of us are facing further financial pressure, the wider impact on associated industries and business in general is unnecessarily damaging.”

Adam Searle, a Suffolk haulage boss, told the paper that the last round of strikes cost him £70,000 in just one week.

Following the latest announcement, the Port of Felixstowe have written on their website: “The company has received notice from Unite the union of further strike action from 07:00 on 27 September to 06:59 on 5 October.

“We are very disappointed that Unite has announced this further strike action at this time. The collective bargaining process has been exhausted and there is no prospect of agreement being reached with the union.