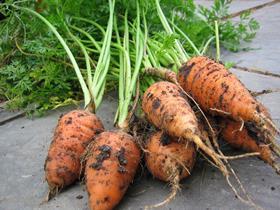 Flooding has made for a challenging Chantenay carrot season in Nottinghamshire where the Freshgro cooperative grows 90 per cent of the UK crop.

The Central and East Midlands have been hit with heavy rainfall in recent weeks and there are ongoing red flood warnings along the River Trent and in surrounding areas.

Martin Evans, who is managing director of Freshgro and chair of the AHDB Field Vegetable Panel, said: “We are working hard to deliver consistent quality crop to our customers. There has been plenty of flooding around us and I’m sure there will be consequences for us at some point.

'We are trying to second guess the weather on a daily basis so we can mitigate the impact of any further wet spells.”

He added: “It’s been difficult to be precise about the rainfall levels because it has fallen at very different rates area by area. Some fields have received the expected amount, while in others the rain gauges have been too small to measure a month’s rainfall in a day.”

Evans also noted that autumn effectively started in August this year, while September and October were cooler and wetter than in previous years. He believes these conditions may yet prove to have a greater long-term impact than the flooding.

Experience of previous wet spells in 2012, 2007 and 2003 has helped Freshgro to minimise the effect of the prolonged, heavy rain on the crop. And the company said two other factors have also been working in its favour over the medium to long term.

Firstly, the season has been extended over the past 20 years, with earlier planting, more plantings over a longer period and extended harvesting.

Secondly, Evans believes the rise in plant-based eating and flexitarian, vegetarian and vegan diets still has the potential to boost sales. “The impact of changing diets has been slower to pull through than we expected so the best is yet to come,” he said. “We’ll see how things look when the rain stops.”