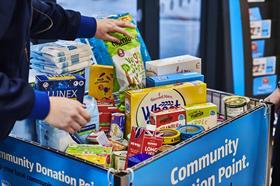 Food banks are preparing for their most challenging Christmas yet as they struggle with rising demand and dwindling stock levels, new research shows.

According to a survey by community giving platform Neighbourly – which Aldi partners with to distribute surplus food from its stores – 70 per cent of food banks, charities and community causes are worried about having enough food to support people this Christmas.

Neighbourly polled more than 600 food banks and community causes nationwide and found that 92 per cent expect this Christmas to be their busiest ever, with more people than ever needing their support.

However, the survey also revealed that almost four in five (79 per cent) food banks have witnessed a drop in donations in recent months – with the fallout of the pandemic and rising cost of living continuing to impact contributions.

On average, food banks expect to see a 40 per cent increase in demand over the next three months, with organisations currently supporting nearly 400 people a week on average. More than three-quarters (77 per cent) say they’ve already experienced an increase in demand since the summer.

From tinned foods to festive treats and toiletries, the research also revealed a list of the items that are most needed by food banks over the festive period to help guide supporters. Shoppers can donate food to local charities, food banks and community groups via the community donation points in Aldi stores nationwide.

Steve Butterworth, CEO of Neighbourly, said: “The findings of our latest survey highlight that the continued impact of the pandemic, combined with increased inflation, is being very much felt by communities up and down the country, with charities and local causes feeling the effects too. We’d encourage anyone who is able to give back in the coming weeks to do so.”

Mary Dunn, managing director of corporate responsibility at Aldi UK, added: “Christmas can be a particularly busy time for the local charities and organisations we support, but this year is set to be more challenging than ever.

“As part of our Christmas campaign with Kevin the Carrot and Marcus Radishford, we have committed to donate 1.8 million meals to good causes in the lead-up to Christmas – and we know our customers want to help too.

“If you feel you are in a position to help, your donation could make all the difference to food banks this Christmas.”

Aldi works with Neighbourly to donate surplus food from stores throughout the year.