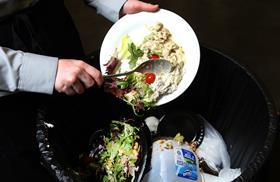 The author of a comprehensive American study says household food waste can be done for “very logical reasons” based on time, safety and demographic characteristics.

Jayson Lusk, distinguished professor and head of Purdue’s Department of Agricultural Economics, said: “A lot of the discussion around food waste had been couched in moral terms, that waste was a sin.

“Food waste can be a result of a mistake or inefficiency, but in a lot of cases it’s done for a very logical reason. Many economic factors are at play in deciding whether to throw food out.”

Lusk added that it was “irrational” to expect people to hang to food when the risk and time spent hanging onto it doesn’t add up.

“In a way, it would kind of be irrational to expect someone to get the same level of enjoyment from that food that we cajole them into keeping. Some people may not want to spend time and energy on preventing waste in that situation that could be better spend on other activities.”

His research, published in Applied Economic Perspectives and Policy, sheds light on US eating habits, revealing 18-44 year-olds were less likely to throw away leftovers than those 65 and older.

The study also suggested middle-income families threw away more food than lower-incomes families, with having children also mitigating waste. Men were also more likely than women to throw away milk when it was one day past expiration.

Lusk concluded that labels are a major contributor to unnecessary waste, calling for more consumer education on supermarket labelling.

“The milk results provide further evidence that more consumer education is needed on date labeling - particularly among those consumers who are likely to throw out milk even when it smells fine. Sensory properties are touted as an important signal for discerning product quality and safety, yet some consumers strictly rely on (potentially misleading) date labels.”