Fresh tech: six of the best 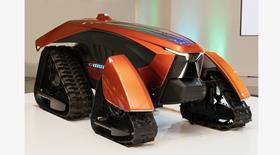 Have you got the X Tractor?

Japanese manufacturer Kubota turned more than a few heads in January when it unveiled plans for a radical new autonomous tractor. Created in response to the dwindling number of farmers and rising population, the Kubota X Tractor is electrically powered via lithium ion energy packs and solar panels and features GPS, sensors, cameras and an AI-based guidance system. So smart is the tractor, in fact, that it can monitor the weather and growth rate of crops to decide for itself when to head out and work on seeding and harvesting. As if that’s not futuristic enough, the four-wheeled crawler can even change its shape to maintain the tractor height at optimal level.

You could have been forgiven for thinking drones would just be a passing fad when they first came out, but all indications are that the little flying robots will actually play a big part in the future of agriculture. A report last year by analysts Markets and Markets forecast that the global market for agricultural drones will rocket from $1.2 billion in 2019 to $4.8bn by 2024, driven by an increase in venture funding and greater availability of software to aid field survey and data analytics. Among the newest innovations is the soon-to-be-released XPlanet Agricultural UAS, described by Chinese manufacturer XAG as “the ultimate agricultural drone”. The device is all about precision farming for seeding, crop spraying and granular spreading, promising to combine higher payload, efficiency and cost-effectiveness with a raft of technological improvements.

Smart farming is the mantra for producers these days, and numerous robots are starting to appear as the rate of technological advancement continues. Visitors to fresh produce trade shows will already be familiar with Octinion’s strawberry-picking robot and perhaps the Sweeper pepper harvesting bot, but that’s just the tip of the iceberg as established names and tech start-ups alike target the agricultural sector. One such firm is Root AI, which has put a particular focus on glasshouse technology including pickers for sensitive fruits such as tomatoes. Its flagship creation features special grippers that can reach deep into tangled vines and pick a single ripe tomato without leaving a mark, thanks to full 3D sensors offering real-time detection.

The concept of an electronic potato might not sound appetising to anyone other than androids, but growers are already using them to help detect sources of damage and bruising. Manufacturer Martin Lishman’s TuberLog Electronic Potato is described as a powerful quality control tool that is put in with a consignment of real spuds and records impacts received during harvesting and processing. Comprised of a data logger housed in a synthetic shape to mimic the size, shape and density of a ware potato, the diagnostic tool allows growers and processors to take preventative action to reduce losses.

Much is talked about in terms of waste on farms, in supermarkets or by the consumer, but in fact in developing countries more than 40 per cent of fruit and vegetables are spoilt before they can ever be eaten. Such sobering statistics led last year to the launch of the Consortium for Innovation in Post-Harvest Loss and Food Waste Reduction, a body that will help find technologies to boost storage capabilities across the world. It comes as the World Resources Institute called for a “decade of storage solutions” to get income-sensitive, climate-smart storage technologies into the hands of farmers and distribution networks around the world. In one notable new development, Belgian firm Sivafrost hopes to complete what it calls the “cold store of the future” this year – a fully automated, high-bay warehouse with 100 per cent error-free logging of pallets, very limited employee exposure to the cold and numerous energy-saving features.

The concept of a fully automated glasshouse is not a dim and distant dream, and in fact is already here in some sectors. Part of the challenge in achieving full automation is to ensure there is a device for every single function, and ticking one of those boxes is a new release from ag-tech expert Autogrow last month. Its wireless smart sensor, Folium, has been designed to give greenhouse operators high-density microclimate data to help improve yield, quality and decision making. Specifically, each Folium sensor gathers environmental data including temperature, humidity, CO2, PAR, RAD and barometric pressure, which growers can view on a heatmap, immediately showing differences across their grow areas.