G’s does its bit for bumblebees 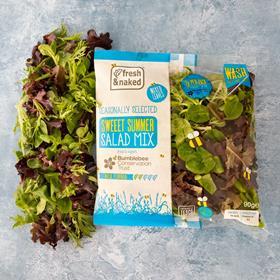 G’s Fresh has teamed up with the Bumblebee Conservation Trust to help stop the decline in bumblebee numbers and species.

To raise national awareness of the issue,G’s has launched a Sweet Summer Salad Mix – containing 90g ofApollo, baby red leaf and lamb’s lettuce –in partnership with the charity. Two pence from every pack sold is being donated to the charity.

In addition, the grower has been creating pollinator-friendly habitats and wildlife corridors to provide a wildflower environment where bumblebees flourish.

It has been calculated that bumblebees and other wild pollinators add over £500 million to the UK food economy each year since they pollinate two-thirds of our food crops.

In the last 80 years, bumblebee populations have crashed, with two species becoming nationally extinct and eight others, a third of the total species, now endangered.

Dorota Sneath, G’s baby leaf product director, said: “Bumblebees and their importance to farming and the natural environment have been widely publicised in recent years. G’s has worked closely with retail customers and shoppers to understand the issues that are important to them.

“We are delighted to be working with the Trust and Tesco to raise money for bumblebee conservation and to highlight the valuable work pollinators do every day. It has been estimated that to pollinate plants manually would cost over £1.8 billion, a job the bumblebees do for free.”

The Bumblebee Conservation Trust was established to protect British bumblebee species and use science and research to address the decline in species and numbers. Its mission is to increase the number and distribution of bumblebees by raising awareness of how vital they are to our food supply.