First digs from this year’s Syngental Quantis heat-stress biostimulant field trials suggest yields may be over 30 per cent lower in untreated crops. 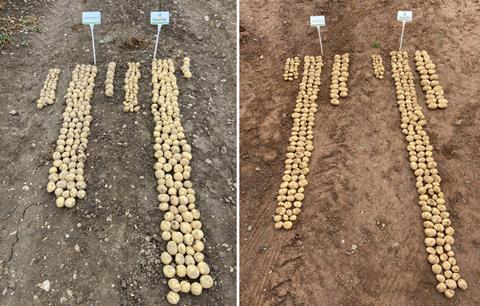 Across a series of trials from the south-east to the mid-west of England, marketable yields are on average 24 per cent higher in the Quantis treated areas, Syngenta said.

The total tuber numbers in marketable size grades have been on average 34 per cent greater in the treated areas, reported Syngenta technical manager, Andy Cunningham.

“What appears apparent is that a Quantis application at early tuber initiation has been hugely beneficial in helping plants to set more tubers,” he said.

“Importantly, further applications during periods of heat stress through the growing season has enabled crops to keep growing and produce more marketable yield.”

All the trials yielded so far had received an application at tuber initiation, with two additional treatments during the tuber filling growth stages - at timings when the Quantis Heat Stress Alert tool forecast periods of challenging conditions.

“Quantis research has shown best results can be achieved with applications two to three days prior to onset of heat stress,” Cunningham advised.

Results of irrigated trials in Kent and the Midlands were most noticeable in producing the greatest uplift in tuber numbers in the 50-60 mm size category, he said. At Weobley in Herefordshire, the crop of Nectar produced 24 per cent more tubers of marketable size and over 30 per cent higher total tuber weight of marketable grades.

“The results have been remarkable, but not entirely surprising given the season’s temperatures,” Cunningham said.

“However, it must be remembered even with consecutive days at 35-38⁰C plus, this season was the hottest summer since 2018. These events are becoming more frequent and more extreme – which growers need to prepare for,” he advised.

For further details on how Quantis works and the Quantis Heat Stress Alert tool, visit the Syngenta website.