Interview: Thymes they are a-changing 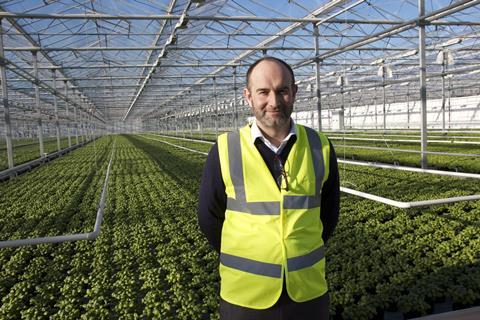 Formula One racing legend Michael Schumacher reportedly stated: “Once something is a passion, the motivation is there.”

On my visit to Vitacress’ HQ, near Chichester, in West Sussex, the German driver’s words certainly rang true. As we walk around the business’ site on a beautiful January day, the invigorating smell of fresh herbs resplendent, and Dire Straits playing from a local radio station over the tannoy, CEO Toby Brinsmead stresses: “The passion of the people here is everything. When you put that together with the right investment, the right technology, and the right insight team, it’s a fantastic combination.”

Despite starting out in insurance, Brinsmead has now worked in the food trade for 20 years, and joined Vitacress in 2013. As he puts it: “I love food. You feel so inspired when you get close to the product. And I’ve always enjoyed working with the retailers.”

We’re joined on the site tour by Chris Moncrieff, Vitacress’ head ofproduction. Moncrieff has been with the business for 33 years, and is a veritable herb expert. Within seconds of meeting him, it is apparent that he encapsulates the sort of passion Brinsmead was eager to make clear his company oozes. As Moncrieff himself tells me: “I’m very passionate about plants – I talk about them as though they are human.”

It’s been an eventful few years since Brinsmead took control of the wheel at Vitacress. After closing the company’s head office in Eastleigh, Hampshire, in 2014, the Chichester site is now the home of all the business’ shared services.

Recently, there has been a simplification of the board structure. Brinsmead notes: “The complex board and management structure we had, it had to go. We now have one operations board, one sales team and one marketing team, with Chris Hall, Simon Conway and Luis Mesquite Dias as local MDs for our salad, herb and Portuguese businesses respectively.”

Last year, Vitacress sold its UK tomatoes business Wight Salads to APS Salads, in a move designed to help the team focus on their core salads and fresh herb lines. Of this move, Brinsmead says: “We needed to look at which part of the business is most competitive. So we either had to be acquisitive, or exit. The money involved lets us invest into what we want to invest in. It puts us in a healthy financial position.”

Vitacress – which featured in 14th spot in the FPJ Big 50 Companies 2016 with a turnover of £169.5 million – made one of the UK fresh produce industry’s biggest investments last year, with its new herb facility becoming fully operational from November 2015.

The £4.5 million expenditure was part of a wider £6m sum spent on improving the Chichester herbs hub in 2015, and a similar figure is expected to be spent on improving and expanding the salad site in St Mary Bourne, in Hampshire, as Vitacress looks to take that part of its business to the next level.

The new herb facility, believed to be the biggest single pot herb growing unit in the UK, and possibly even Europe, builds upon the closure of Vitacress’ West End herb site in nearby Angmering. Brinsmead says: “The opportunity was triggered by the need to move from West End. There was a glasshouse here anyway, which was rented out, so we thought, ‘let’s make it the biggest and the best facility to help us move forward in a market that’s growing’.”

The fresh herb category achieved double-digit growth in 2015. The indications are that this is because people are getting more adventurous with their cuisine in the UK, and points to the growing trend for home cooking as helping the fresh herb market.

Brinsmead also notes that solo salad leaves, like spinach and rocket, are outselling the rest of the sector, with the 18-30-year-old category in particular inspired to go out and buy these products, as well as herbs too.In order to target this market, the company has partnered with food and lifestyle blogger Carly Rowena to take part in a marketing campaign aimed at getting this generation to focus as much on buying fresh herbs as they do on buying bags of spinach and rocket.

Vitacress has achieved a “quarter of a million hits on various bits” through this marketing activity, and is looking at the moment at what the next stage of its Love Fresh Herbs campaign will look like. Despite this spend on a new hi-tech facility, and a desire to increase the number of fresh herb consumers, Moncrieff is insistent that one thing must not change.

He tells me: “There’s a danger you lose touch with what you’re doing if you have the factory fully automated. The start of the process, and the packing, is automated, but the nursery has human interaction with living plants to call on the years of expertise we have here.

“People are so important to the operation. The control of water is manual. Someone checks it all and presses the trigger: ‘water or no water’. We are reliant on these guys and girls – without them we wouldn’t be as successful as we are. We don’t want to get away from a time when someone is getting close to the herbs and analysing them.”

Asked about brands, Brinsmead notes that in Portugal, half the salad fixture is branded Vitacress, and that quite a lot of herbs go into the mixed salads packs sold in that country. He says that Vitacress is looking at opportunities for doing something similar in the UK.

In another exchange of ideas between the two markets, Vitacress has recently launched bowl salads in Portugal, and these items – already established in the UK – are now starting to take off there.

Brinsmead also reveals that the firm is researching retail branding in the UK – beyond what it already does with the more niche products in the Steve’s Leaves range, and on top of the Vitacress logo that can be found in the wholesale scene. Nevertheless, he cautions: “Could there be a more mainstream UK brand? The jury is out.”

The jury may remain out for a while yet, as Vitacress plans to put more money behind Steve’s Leaves. Brinsmead says: “It’s a great fit in the convenience channel due to its size, and it has good online potential. We’ve launched one bowl, and will launch more. People love the product and its packaging, and the quirky leaf combinations.”

Brinsmead also advises the market to “watch this space” in regards to the launch of new varieties of herbs in 2016: “We keep working on visions and strategy to produce the freshest, healthiest, tastiest, most exciting products,” he adds. “There are some exciting new products we want to launch this year.”

As for change at the boardroom level, Brinsmead is more coy, but notes: “If the right thing is out there, there’s the potential for buying. If we see something that fits with us, then we would do it. Perhaps a similar product to what we do, but different geography.”

Another point Brinsmead and Moncrieff are keen to stress to me on my trip to the site is the high number of members of the same family who work in the business. But when the workplace smells this nice, who can blame them?

With the skillsets and passion being passed down the generations, and with the business perfectly poised to take advantage of a trend that only seems to be getting stronger, Vitacress looks set to ride the crest of a wave for a long while yet.

• 9ha of glass at the Chichester site

• Another 3ha into which Vitacress can expand on that site

• 350 staff based at Chichester

• The site processes 20m pot herbs per annum, most of which are grown there

• Vitacress caters for just over half the UK retail market

• Basil is the most popular pot herb in the UK

• Coriander is the most popular cut herb