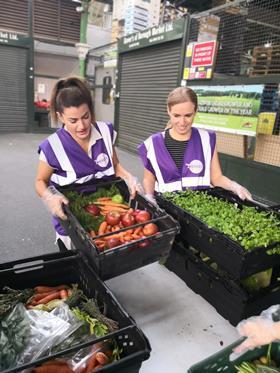 There has been a huge rise in surplus food redistribution during lockdown, with the equivalent of more than 220 million meals worth of food prevented from going to waste by food businesses through partnerships with charitable and commercial redistributors, helped by UK government funding.

That's according to sustainability charity WRAP in its new report, ‘Surplus food redistribution in the UK 2015-2020’. The reports reveals that more than 92,000 tonnes of surplus food, worth £280m, was redistributed in 2020, and that charitable redistribution has increased 5.5-fold since records began and made up 70 per cent of the total tonnage in 2020. Commercial redistribution shows a 1.6-fold increase since 2015.

WRAP also found that while 80 per cent of surplus food originates from retail and food manufacture, an increasing percentage came from the hospitality and foodservice sector, and farms, in 2020 – approximately 12 per cent of the total.

Unsurprisingly, surplus food arising due to Covid-related disruption to the supply chain contributed significantly to the increases in 2020, linked to around 38 per cent of the total. However, the majority of the increase was unrelated to Covid-19 but driven by the expanding capacity and capabilities of redistribution organisations and continuing growth in the amount of surplus food businesses are making available, supported by the work of the Courtauld 2025 Redistribution Working Group.

Grant funding by Defra facilitated increases in availability, capacity and capabilities, potentially enabling over 50 per cent of the increase in tonnage, and helping to lay the foundations for further increases in the future, the report said.

Total food redistributed between 2015 and 2020 amounts to 320,000 tonnes, worth almost a billion pounds (£970m) and equivalent to more than three quarters of a billion meals. Since UK data was first reported in 2015, redistribution has tripled.

Chilled foods including fresh meat, fish, eggs, dairy and chilled pre-prepared items made up the largest proportion of surplus food in 2020 (29 per cent), followed by ambient and drinks, and fresh produce (both 26 per cent).

WRAP chief executive Marcus Gover said: “Our report shows strong growth, but more needs to be done to meet Courtauld 2025 and UN Sustainable Development Goal 12.3 targets. We know there is the potential to more than double the amount of food redistributed so while I welcome these figures, I would ask all of those involved to redouble their efforts and make full use of WRAP’s resources and support.

'While redistribution is an important tool, it is not the answer to food waste. Priority must be given to reducing surplus and waste in the first place. This is critical for business efficiency and essential if we are to achieve our environmental objectives.”

Funding follows WRAP’s 2017 pilot Food Waste Reduction Fund of £500,000, and Defra’s 2019 ‘Overcoming Barriers to Redistribution’ grant scheme, which awarded £4.2m. The Courtauld 2025 Redistribution Working Group has been in place to provide a forum for learning and success sharing for grant recipients.

With many suppliers producing own-label food for multiple retailers, WRAP’s Working Group has developed new best practice in the form of ‘Guidance on redistributing own-label products within the supply chain’ to enable more surplus to be redistributed, and to more organisations across the UK.

The Best Practice guide identifies how a more consistent approach can be taken to the redistribution of surplus retail own-label food, which it said will result in more food being made available to more redistribution organisations, while still maintaining food safety and brand integrity.

WRAP also identified a wide variation in the extent to which own-label products are prioritised for redistribution and urged retailers and suppliers to fully implement these guidelines.