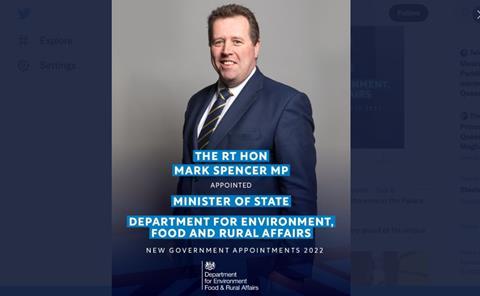 Former chief whip and leader of the House of Commons Mark Spencer was appointed Defra minister in Liz Truss’s new government last week (7 September) replacing Victoria Prentis, who becomes minister of state for the Department of Work and Pensions.

From a farming family, Spencer was first elected to Parliament as Conservative MP for Sherwood in May 2010.

Commenting on his new role via Twitter, Spencer said: “Delighted to be joining the Defra team. Looking forward to supporting food production and the environment and our rural communities.”

Outgoing farming minister Victoria Prentis said: “It has been a great privilege to serve in @DefraGovUK. Farming and the environment will always be a major part of my life. I am very proud to have taken through the Agriculture Act & Fisheries Act, and to have launched the first ever Government Food Strategy.

“I am confident that our agricultural transition will put UK food security on a new sustainable footing. I’d like to thank my dedicated officials and colleagues at Defra for their support over the past two and a half years, and wish them well.”