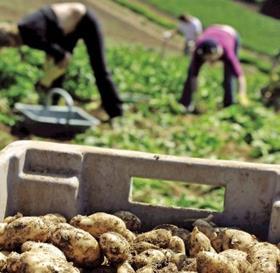 With a major new campaign to promote fresh potatoes across Britain and Ireland about to commence, AHDB Potatoes and Bord Bia (the Irish food board) are calling on the industry to get behind it and help change the way consumers think about potatoes.

The first burst of joint venture promotional activity, secured with EU co-funding, will appear from 5 October. Aimed primarily at younger consumers, in particular 25-34 year old females, the campaign will position potatoes as a relevant and convenient food which is 'healthy, tasty and versatile'.

'Fun and impactful' advertising will run in high-profile lifestyle magazines (Now Magazine, Closer and Heat), and on digital channels (MailOnline), using a 'cheeky' potato character to show that potatoes are ‘more than a bit on the side’. It is hoped that this message will be further supported by extensive social media activity, blogger and vlogger partnerships, recipe development and a nationwide PR campaign.

“We have put together a highly visible programme which will engage with a core audience of young females, who are the most infrequent purchasers of potatoes. It includes a mix of traditional tactics such as advertising and PR combined with great social media and digital content.

'In addition, we’re building partnerships with influential people and other advocates that are active in health, cookery and fitness. This integrated campaign will ensure we reach consumers at every opportunity; instilling positive shopping and eating habits that will benefit the industry both now and in the long-term.”

To maximise the campaign’s impact during October, AHDB Potatoes is encouraging the industry to step-up activity to promote potatoes.

White said: “Although this will be a high profile campaign, it will have even greater impact if growers, packers, retailers and distributors get behind it. To help industry do that, we will have free promotional tools available as part of our ‘One Voice’ initiative, including themed artwork, a host of new quick-cook recipes (20-30 minutes), key nutritional messages and a YouTube video of our potato character, all of which can be shared across various platforms. Full details and access to the material can be found on our website.

“With four in 10 shoppers making the decision to purchase potatoes at the fixture, it is important that we offer them the guidance and inspiration they are looking for. We are therefore urging packers and retailers to include more varietal and nutritional information on-pack as well as recipe imagery and even quick-cook recipe ideas in-store to coincide with our campaign.

“Together, we can really make a difference and help consumers re-connect with the category, building their enthusiasm and propensity to make a purchase.”