‘Only a quarter of UK adults get five a day’ 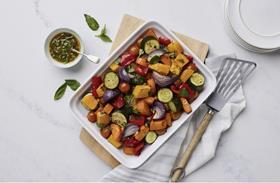 Almost three quarters (73 per cent) of UK adults eat less than five a day, according to new research revealed by Asda.

Around seven in 10 (67 per cent) claim healthy eating is a challenge, with one in 10 admitting they find it a constant struggle.

The data highlights a number of reasons that Brits find it difficult to get their five a day. Some lack confidence around cooking from scratch, with 29 per cent admitting it’s because they don’t know how; a third (33 per cent) felt that veg can be too expensive; and 19 per cent said veg-based meals are boring.

The research also revealed that almost half (48 per cent) say they throw uneaten veg away, and more than a third (38 per cent) admit to emptying the fridge out before the ‘use by’ date comes around, despite the Food Standards Agency confirming it is safe to consume before, or on, the ‘use by’ date.

The research also unveiled the most and least purchased fruit and vegetables at Asda. These are as follows:

To help people make healthier meal choices and help prevent food waste, Asda has worked with its nutritionists and chefs to develop six ‘Plant Pot’ recipes, which each contain up to five vegetables and start from as little as 80p per portion.

All six recipes are designed to be made in one pot, so that even beginner chefs and the most time-stretched parents can prepare them. The versatile dishes also have an emphasis on using up whatever is left in the fridge.

The ingredients for each recipe can be easily ordered with just one click on the Asda website.

Andrew Johnston, innovation chef at Asda, commented:“It is important for us to create meal options that, as well as being tasty and nutritious, are also affordable for our customers. Our new Vegetable Tray Bake with Roast Garlic dressing is just 80p per portion, can be made in under an hour and includes four out of the recommended five a day.

“We want to show our customers how easy it can be to incorporate vegetables they may not usually pick up on their weekly shop, as well as items that can sometimes go to waste. Our new Roasted Vegetable and Chickpea Inspired Tagine includes some of these products: aubergines and butternut squash.”