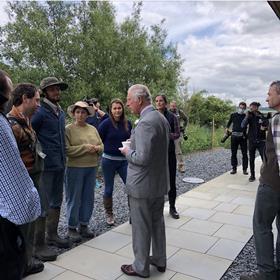 The Prince of Wales met with a series of sustainable farmers and food producers yesterday (22 June) as he learned more about efforts being made in developing more environmentally focused produce throughout the UK.

The meeting was hosted at FarmED, a not-for-profit organisation based at 107-acre Honeydale Farm in the Cotswolds, which focuses on education surrounding agroecology and the development of greener ways of farming.

Several sustainable producers got the opportunity to meet His Royal Highness, who expressed his admiration for their efforts.

The group were able to explain how their respective processes were looking to contribute to a more sustainable farming system built on regenerative agriculture and farming with nature.

One of those to meet the prince was Dominie Fearn, the founder of the Wild Hare Group, which produces sustainable foods that includes a ready meal range consisting of British grown ingredients.

Speaking of the meeting, Fearn said: “Prince Charles is long renowned as a champion of the environment, and it was brilliant to meet him face-to-face today to hear some of his views and discuss his longer-term environmental visions. I got the opportunity to explain what we’re trying to achieve at Wild Hare and it was wonderful to hear him voice support for our ambitions. He told me he was ‘full of admiration’ for our endeavours, which was a tremendous compliment, and it’s encouragement we’ll take with us as we look to progress as a business.”