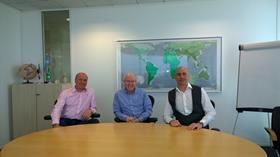 Several firms from the fresh produce industry have been named in the London Stock Exchange's 1,000 Companies to Inspire Britain 2015 list.

The list, only the second of its kind to be compiled, claims to identify the fastest-growing and most dynamic small and medium-sized businesses (SMEs) in the UK.

To be inclued in the list, companies had to show consistent revenue growth over a minimum of four years, 'significantly outperforming' their industry peers, and 'spearheading the revival of the UK economy'.

Vidafresh MD, Terry Watts, said: 'We are immensely proud to be recognised as one of the 1,000 Companies to Inspire Britain.

'Like many UK industries, ours has been through difficult and challenging times in recent years. The pressures and demands that importers work under, coupled with changes in the way many retailers and other important clients now look to source their produce has taken its toll on a number of major players within our industry, so being awarded the title of one of the UK's most inspirational companies is testament to our strength and ability to be proactive to these changes byadapting our business to meet our clients' individual requirements and expectations.

'There are five million businesses in the UK, and everyone has heard the saying 'turnover for vanity, profit for sanity', but we have spent five years building a sustainable and profitable company, so this accolade is extremely rewarding for all the hard work by the whole Vidafresh team.'