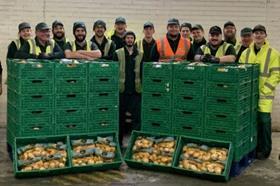 The Welsh company provided one tonne of its spuds to Pembrokeshire Action to Combat Hardship (PATCH), a local organisation who help people struggling with financial difficulties by providing food parcels, clothing and other household items to people in the county.

The operations team at Puffin Produce wanted to support their local community most in need during the festive season by preparing 500 bags of its Blas y Tir Maris Piper Potatoes for the charity.

Jack Hartnell, process improvement manager, said: “PATCH is a local charity helping those in desperate need in the Pembrokeshire area. We hope that our donation goes some way to helping those in genuine need this festive season.”

Puffin Produce grow a range of potatoes and veg on the Pemrokeshire region, with its “Blas y Tir” Pembrokeshire Earlies gaining European Protected Geographical Status in 2013.