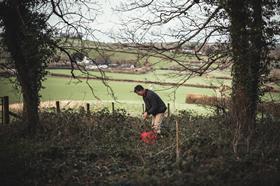 Customers of organic veg box company Riverford will have the chance to contribute to a pioneering agroforestry and tree-planting trial in Devon thanks to a new ‘refer a friend’ scheme with a positive impact twist.

For every new customer who signs up under the scheme, the company will plant a walnut tree on its farm in Devon or on farms belonging to its cooperative of organic farmers, which will store up to a tonne of carbon across a 20-year period. Both the referring customer and their friend will also receive £15 credit to spend on the Riverford website.

“Few would doubt that tree planting must be part of our response to the climate crisis, but we must also feed ourselves on an over-crowded island with limited land,” he said.

“Combining trees and crops or grazing (agroforestry) can deliver the greatest ecological benefit for the least loss of food production. In fact, nuts grown in an agroforestry system, with grazing or crops in between rows increases total food output per acre, while sequestering carbon and enhancing biodiversity; a win, win, win.”

In a video explaining the project, he said there are currently no financial incentives for farmers to produce food from tree crops in this way, despite its multiple environmental benefits.

“The simple answer is that currently it doesn’t pay and the potential profits are too uncertain and distant to attract commercial farmers. The need for action is urgent; trees take time to grow and we cannot wait any longer for a plan to emerge from Defra,” he said.

Trees will be planted from the end of November to March and over the key midwinter tree-planting season. Generated by a unique Refer a Friend code found on customers’ online Riverford account, there is no limit to how many times a code can be used, meaning that customers could generate unlimited tree planting (and credit). Those who refer the most will be invited to an all expenses trip to Devon to witness and help with the tree planting alongside Singh-Watson and other organic farmers.

The initiative comes alongside Riverford’s new Climate Action Plan, which also include investing in a widespread roll out of electric vehicles, solar power and nature-based solutions such as native tree planting, hedge restoration and biodiversity projects.

Singh-Watson has already planted 20 acres of hazelnuts and walnuts on steep marginal land at his farm in Devon; now the new scheme will roll this out to other organic farmland across Devon.