Sainsbury's pledges to be net zero by 2035 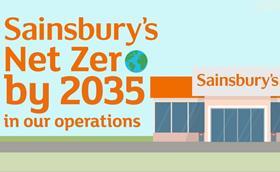 Sainsbury’s has pledged to become net zero in its own operations by 2035, five years earlier than its original ambition and aligned to the UN’s goal to limit global warming to 1.5 degrees.

The retailer said it has cut its carbon footprint by 47 per cent in the last 17 years, despite its space increasing by over 40 per cent. In the last year, and it has reduced its absolute greenhouse gas emissions from its own operations by 25,580 tCO2e, year on year.

By the end of the year the supermarket said it will be using 100 per cent renewable electricity across its entire estate and has committed to the long-term purchasing of renewable energy from new wind farms and solar projects to be built over the next two years, significantly reducing its reliance on fossil fuels.

Sainsbury's stressed that despite making significant progress in the last two years - reducing greenhouse gas emissions in its own operations by 14 per cent - to meet its target it will need to collaborate with government, industry, suppliers and academia to share knowledge and find solutions.

As a retailer sourcing over 30,000 products from more than 70 countries Sainsbury’s said it is also working collaboratively with its suppliers to set their own net-zero commitments, with the goal of reducing Scope 3 emissions in its value chain by 30 per cent by 2030.

This includes reducing emissions from purchased goods and services sold, upstream transport and distribution and the direct use of sold products. This year Sainsbury’s has written to 400 of its top suppliers asking them to report and disclose against their carbon-reduction targets.

To showcase the good work its food producers are already doing to tackle climate change, the retailer has launched ‘Sainsbury’s Global Farm’, an online resource connecting customers with different suppliers around the world. In partnership with LEAF, the retailer hopes to raise awareness of where food comes from, how it is produced and how it is working with farmers to drive lasting positive change in the communities it serves and sources from.

Customers will be able to meet the farmers behind some of their favourite food and discover how their farming practices are better for the planet.

Sainsbury's chief executive Simon Roberts said: “The clock is ticking. Climate targets matter – but action to deliver them matters more. The progress we’ve made has enabled us to accelerate our own targets and move faster to cut our emissions.

'We recognise that we not only have a responsibility to our colleagues and the communities we serve in the UK, but to those we source from globally, to reduce the impact our business has on the environment. The United Nations report made clear that we all need to step up our efforts and be ambitious in our pursuits to limit global warming to 1.5 degrees.

“We have a strong heritage in reducing our own emissions and are collaborating closely with our suppliers to ensure we’re driving positive change across our value chain too. Tackling the climate emergency requires collaborative and transformational thinking across industry and government, and a willingness to work together and share learnings globally, so that we can all take meaningful, immediate action.

'I’m really proud that Sainsbury’s continues to lead the charge and encourage others to change and evolve with us for the benefit of all.”