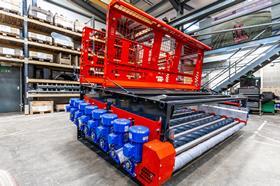 Potato machinery specialist Scotts Precision Manufacturing is aiming to “broaden the appeal” of its produce cleaning machine, the Evolution Separator, when it exhibits at Fruit Logistica for the first time next week.

Scotts, which can be found in Hall 5.1 B22 at the trade show on 7 April, has been developing the machine for the past 15 years, allowing it to be used with a number of fruits, vegetables, brassicas and alliums.

Nevertheless, the Evolution Separator is still most widely used by potato and carrot growers and processors worldwide, and Scott wants to showcase the machine’s broader potential by attending a number of European exhibitions including Fruit Logistica, Potato Europe, Interpom, EIMA, Agritechnica, and some smaller regional events.

“It’s very important for us to have direct contact with the end user to better understand their specific needs and drive further development,” said Scott. “Being face to face at these events with potential future customers is by far the best way to work.”

To support future growth, Scotts recently appointed James Hinsby, who is based in Salzburg in Austria, as export after sales manager. Hinsby has 20 years’ experience in the agricultural sector, managing various farming operations throughout Europe and Eastern Europe.