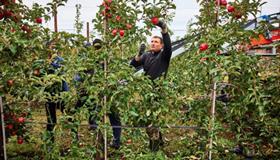 The harvest at Adrian Scripps in November 2021

The first ever UK-grown crop of Pink Lady is set to hit shelves at UK supermarkets following a trial at Adrian Scripps and Worldwide Fruit.

Coregeo, Star Fruits and APAL, who have collaborated with the producers on the trials, announced that fruit would be available in stores at 'major retailers' from 18 February.

Coregeo and Star Fruits hold the rights to the varieties marketed under the Pink Lady and Joya trademarks and are the master licensees in Europe. After an initial trial in 2011, they asked Adrian Scripps and Worldwide Fruit to begin new commercial trials in the UK.

According to Coregeo, the orchards used were selected for their ability to consistently produce high quality Pink Lady, and the marketing firm emphasised that the variety must be allowed plenty of time on the tree to develop its sweet, fizzy crunch since it is the first variety to blossom and the last to be picked.

Current availability of the variety, from the Northern Hemisphere, runs from November until June, at which point apples from the Southern Hemisphere arrive to provide year-round supply to the market.

Commercial orchards for the variety exist in France, Spain and Italy as well as the main apple-producing countries of the Southern Hemisphere.

The Pink Lady brand, which is managed in the UKby marketing specialist Coregeo, is the number one fresh produce label in Britain.