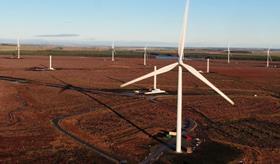 A new windfarm backed by Tesco is now live and generating renewable energy.

In partnership with ScottishPower, the 30MW 15-turbine Halsary wind farm in Caithness, Scotland, will provide enough clean energy to power the equivalent of almost 20,000 homes a year. The retailer said this represents a major step towards powering Tesco stores directly from renewable sources and becoming a net-zero business by 2035, while also helping to make renewable energy cheaper and more accessible for the rest of the UK.

In 2019 Tesco announced a major project to source green electricity directly from five windfarms. These are part of the largest unsubsidised renewable PPA in the UK, covering five windfarms and four solar farms, which when completed will provide nearly 600GWh every year.

When these are all operational it will supply Tesco with over 20 per cent of its electricity needs direct from renewable energy.

Tesco said these long-term agreements are central to its strategy to source renewable electricity, and is expected to guarantee procurement over a 15-year period on average.

Chief executive Jason Tarry said: “This is a critical year for climate action and these long-term renewable energy agreements are crucial to securing Tesco’s future energy needs and meeting our net-zero commitments. These partnerships will also help create more affordable access to renewable energy and support the UK in realising its climate change targets.

“Real change requires that businesses now start moving from making commitments to driving transformative action. Now is the time to accelerate our efforts to tackle the biggest challenge of our lifetime.”