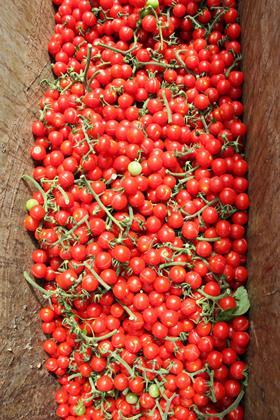 BioBoost, an EU-funded project with partners in Belgium, the Netherlands and the UK, is based on the principle of a circular economy to re-inject value into waste, rather than just redistribute it or use it to power energy plants.

An Callens, of Vives University in Flanders, Belgium, is heading up one of the projects and is looking at the ‘valorisation of horticulture waste’. She explains: “A lot of residual food waste streams we can’t avoid, so we have to look at valorising them for firstly human products, then animal feed, then insects. Burning it or dumping it are the last two options.”

The project at Vives University has two clear aims: to add as much value as possible, and be as cheap as possible. Categorising waste is the first stage, says Callens, with non-edible produce going to projects looking at food for insects, such as the black soldier fly, which is a nutritious food for fish. On edible waste, Callens says they are looking to replicate the success of products such as hop shoot jams and other preserves, made with the fibrous stems of hops, which are a local Belgian delicacy. Another success has been turning waste strawberries into a coulis, by lightly pasteurising deformed or small berries, she says.

“We have some bottlenecks in this project, such as the high moisture, variable composition, and unpredictable volumes of the food waste,” says Callens. To deal with the initial obstacle of waste variability, researchers are looking at how to best ‘stabilise’ various products so that valuable components can be preserved for future use, through processes such as cooling, freeze drying, heating or fermenting.

On a more chemical level, Jean Fitzgerald, of BioBoost’s UK partner NIAB EMR, is heading up a project looking at turning waste into biopesticides. “One of the problems with biopesticides is that growers aren’t convinced,” she says. “They do work, but they take time to work and they might need more than one application. The environment you’re growing in might not be suitable for fungi.

“We want to use plant waste to increase the way fungi survives in the soil. They might grow on the plant waste before the pest arrives, so there is a higher percentage of fungi there when the pest does arrive.”

This project began by looking at how waste from the mushroom industry could be used to increase the population of one biopesticide, an entomopathogenic fungi, to tackle thrips and black vine weevil in horticulture crops. In both a sample test and in commercial growing media the compost maintained, and in some cases improved, the fungi population.

“The potential benefit of using spent mushroom compost is a lower cost and higher efficacy of biopesticides,” says Fitzgerald. “As part of the BioBoost project we’re interested in looking at other waste streams, such as soft fruit, because we’ve got quite a lot of that thanks to the SWD pest in the UK.”

Connecting one industry’s waste with another’s raw materials is Matt McLaren with his business Entomics, which is another BioBoost project, and is looking at how to transform food waste into high-value feed for fish and other animals. The four co-founders met while studying at the University of Cambridge, where they spotted a gap in the market for sustainable animal feed for the anticipated rise in livestock requirements and a growing world population. The solution is the black soldier fly, says McLaren, which efficiently transforms waste into protein and fat compounds.

“In Scotland, most fish feed compounds come from Peru and Chile from trawled sources, which is not sustainable,” says McLaren. “The first area we’re looking at is aquaculture feed, as that’s the first legal area. We’re also working with Sainsbury’s to look at upscaling waste that would usually go to anaerobic digestion.”

While redistribution and simply reducing waste has a vital role in dealing with the food waste epidemic, BioBoost’s diverse projects are linked with economic opportunity, and that might well be its valuable key to success.