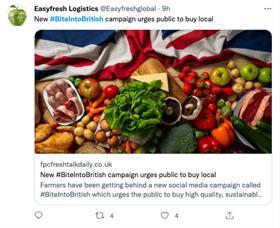 Farmers have been getting behind a new social media campaign called #BiteIntoBritish which urges the public to buy high quality, sustainable British food, reports Farming UK.

Launched at the start of COP26, the campaign encourages people connected to farming to spread the 'Bite Into British' message on social media.

Farmers from across all sectors have been uploading clips of themselves holding British food while saying 'Bite into British', Farming UK writes.

Encouraging people to get involved in their project, pig producers and sisters Vicky, Kate and Rachel Morgan, told the publication: 'British agriculture is in a very dangerous place and we need to take action.

'Farming is in the media a lot at the moment, most of it is negative so let’s change it, let’s shout about climate friendly British produce, be it meat, fruit, grain, veg this is about us all.

'We are environmentally sustainable – lets buy British and cut our food miles down.'

Others posted similar messages to promote the sustainability of British farming produce during the COP26 conference.